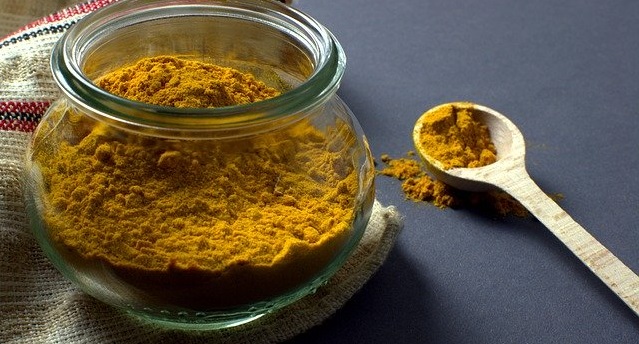 Many doctors say that turmeric is arguably the most powerful herb on the planet! It is said to fight off and potentially reverse many diseases. But is it really as good as they claim? In this article you’ll discover ten turmeric health benefits, based on scientific research.

Turmeric is the root of the Curcuma Longa, a plant that grows in Asia. It has been used in India as a spice, a medicinal herb and a dye for thousands of years.

The active components that give turmeric its many health benefits are curcuminoids. The main one is curcumin. There has been extensive research into the acclaimed benefits of curcumin, with over 10,000 scientific articles and studies on the subject.

Here are the main health benefits of turmeric that are actually backed by research:

Turmeric is well known for its powerful anti-inflammatory and pain reducing characteristics. In fact, turmeric is one of the most popular natural supplements for arthritis.

Arthritis is a terrible condition, most commonly caused by inflammation of the joints. It limits daily activities and the risk of being afflicted by it increases as we get older.

A very interesting study conducted on rheumatoid arthritis patients compared the benefits of turmeric to diclofenac sodium (a common arthritis drug). The problem with diclofenac sodium is that it puts people at risk of damaging their kidneys and producing heart disease.

The result of the study was extremely promising. The turmeric group showed the highest percentage of improvement in overall disease score, with much better scores than the patients used in the diclofenac sodium. Most importantly, the turmeric treatment was found to be safe, without any adverse effects!

So, if you’re having any mobility problems due to arthritis, adding turmeric to your diet is definitely worth a try. The simplest way to do this is by using turmeric extract powder, which contains up to 95% Curcuminoids. This can easily be added to your stir-fried veggies, salads, smoothies or even simply mixed with warm water.

This is a great drink to start off your day and start experiencing the anti-inflammatory goodness and other health benefits of turmeric.

Pour the turmeric powder and the black pepper into the water. Stir this mixture well and drink it while the water is still warm.

Why add black pepper? Studies show that piperine, an alkaloid in black pepper, helps significantly increase the bioavailability of curcumin. In other words… adding black pepper to the mixture helps your body absorb the active components from turmeric, making them much more effective.

Research suggests that curcumin, the active component found in turmeric, has therapeutic potential to counteract diabetes and its complications. One of the most common complications and diabetes is nerve damage known as diabetic neuropathy. This condition can take several forms and cause serious symptoms including for example muscle weakness and even blindness. A study in rats found that supplementing with curcumin significantly reduces diabetic neuropathic pain.

Another condition called diabetic nephropathy can lead to kidney failure. A meta-analysis confirmed that curcumin can also protect the kidneys in diabetic patients from irreversible damage.

Research also suggests that curcumin may help reduce insulin resistance, which is a precurser to diabetes.

If you’re overweight and you need to shed a couple pounds turmeric may benefit you. A study published in the Journal of BioFactors showed that curcumin may help reduce the growth of fat cells. This is pretty incredible! The researchers found that the anti-inflammatory properties of curcumin were effective at suppressing the inflammatory processes of obesity and its adverse effects on health.

So, you may want to consider taking curcumin on daily basis if you’re aiming to lose a couple of pounds. Of course it’s not a substitute for a healthy, well balanced diet. However, it’s one of those little things you can do to give you an edge in the battle against unwanted pounds.

Turmeric is one of the top fat burning spices. Not only will help you get rid of unwanted fat… it’s a great way to add extra flavor to your food as well!

Pre-diabetes and high cholesterol levels are a couple of the most important reasons why people are developing heart disease at such an alarming rate. You probably won’t notice you have high cholesterol or pre-diabetes… until it’s too late. By that time the oxidative stress will have damaged the inside of your blood vessels and ruined the arteries with plaque buildup!

A study found that curcumin is very effective at reducing oxidative stress and inflammation in the treatment of high cholesterol levels. You can also combine turmeric with omega-3 fish oil to make it extra effective. This is because curcumin may also act as an omega-3 booster.

Another very important health benefit of turmeric is depression relief. With dozens of new studies backing it up. For example one study reviewed six clinical trials with a total of 377 patients, comparing the use of curcumin to placebo. This showed that the patients taking curcumin experienced a significant reduction of depressive symptoms as well as significant anti-anxiety effects.

In another double blind study, 56 individuals with major depressive disorder were treated with curcumin (500 mg twice daily) or a placebo for a period of 8 weeks. From weeks 4 to 8, curcumin was significantly more effective than placebo in improving mood-related symptoms. 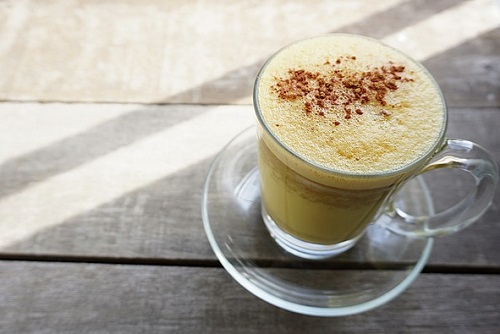 Turmeric milk is a great, soothing drink that helps you relax at night. It also provides you with the anti-inflammatory, pain relief, antioxidant and many other health benefits that turmeric has to offer.

Add all the ingredients to a saucepan over medium heat and bring to a simmer. Let it simmer for a few minutes to let the flavors meld.

One of the more widely accepted properties of curcumin in the scientific community is its ability to relieve pain. In 2014 the European Journal of pharmacology published research that discovered how curcumin naturally activates the opioid system in diabetic rats. The opioid system is commonly used in medicine to control pain responses in the person that’s suffering from pain.

Other studies have found that curcumin can be effective in for example wound healing, burning pain, inflammation induced arthritis pain, neuropathic pain, joint pain and even sciatic nerve pain.

What’s even more impressive is how curcumin may help reduce pain induced depression. Recent studies have found that a high dose of curcumin can even relieve depressive behavioral issues related to pain.

Turmeric is an excellent ally to detoxify the body. Every day we are exposed to environmental and dietary toxins. For example breathing toxic chemicals and eating foods that contain pesticides. Even food colorings may be toxic to the body.

The organ in charge of detoxifying the body is your liver. It does so in two phases, aptly named phase 1 and phase 2. Turmeric plays a role in both phases, helping your liver maintain its natural detoxification rhythm and helping it operate correctly.

Turmeric is also a potent weapon in the battle against fatty liver, another disease that is spreading rapidly, mainly due to our modern day diet. 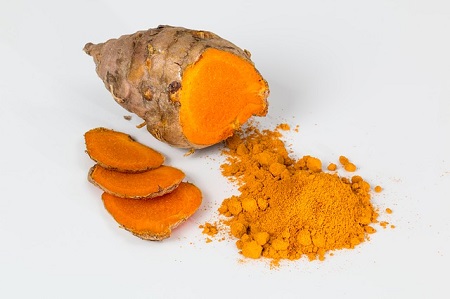 Probably one of the most impressive health benefits of turmeric is its ability reduce inflammation. A large number of diseases, such as cancer, ulcerative colitis, arthritis, high cholesterol and chronic pain… to name a few, are associated to inflammation.

Studies suggest that curcumin can suppress pro-inflammatory pathways linked with most chronic diseases. It can block both the production and the action of TNF (tumor necrosis factor) that causes inflammation.

Another study evaluated several anti-inflammatory compounds. It was found that aspirin and ibuprofen – the most common NSAIDs used today – were less effective than curcumin inflammation wise.

The anti-inflammatory effect of curcumin has also been studied as a possible treatment for Alzheimer’s disease. Inflammation is often the root cause of certain chronic diseases that otherwise would be impossible to treat. Preventing or reducing inflammation also reduces the risk of contracting these diseases.

So, taking turmeric on a daily basis may help your body cope with ongoing inflammation and help prevent or reduce many chronic health issues.

What many people don’t know is that inflammatory processes can sometimes show up in the skin. This might include for example acne or psoriasis. As mentioned before, turmeric health benefits include anti-inflammatory properties and antioxidant properties. These are shown to be effective in treating multiple skin conditions.

Research shows that curcumin may protect your skin by stopping free radicals and reducing inflammation. This may help in the treatment of various skin diseases like scleroderma, psoriasis and even skin cancer. Curcumin treatment has also been shown to reduce wound-healing time.

Another study shows that turmeric may be used to treat a variety of dermatologic diseases, including acne, atopic dermatitis, psoriasis, radiodermatitis, and vitiligo. Ten different studies noted significant improvement in skin disease severity in groups treated with turmeric/curcumin compared with control groups.

In India turmeric has been used for centuries as a face mask for smoother, healthier and more radiant skint. It’s also said to have anti-aging benefits, helping keep wrinkles at bay.

Mix the turmeric powder into the yogurt until you have a smooth yellow mixture. Apply this to your face. Leave it on for 20-30 minutes and then wash it off.

One of the most well studied diseases in the world is cancer. Although progress is slow, research has managed to discover that some natural supplements have anti-cancer properties. Turmeric, with its active component curcumin, is one to consider.

Several lab studies on cancer cells suggest that curcumin may have an anti-cancer effect that seems to kill off cancer cells and prevent them from growing. The best effect has been seen in breast cancer, bowel cancer, stomach cancer and skin cancer cells.

Turmeric has a large amount of acclaimed health benefits. Although not all of these are backed by research, there thousands of studies which prove that turmeric, and especially its active compound turmeric, has more than enough benefits to make it well worth including in your diet.

To get the most out of the numerous health benefits turmeric has to offer, it is recommended to use it in combination with piperine. This helps substantially increase the absorption of curcumin.

We use cookies to ensure that we give you the best experience on our website. If you continue to use this site we will assume that you are happy with it.OkPrivacy policy